Balliol College Library‘s early printed books blog is up and running! Tune in all year for posts by project staff Lucy and Nikki on the Reconstructing Nicholas Crouch cataloguing & conservation project:https://balliollibrary.wordpress.com/. There’s a link in the menu bar at right as well.

This post was originally published by Mary Addison on 16 November 2013 at http://www.addisonembroideryatthevicarage.co.uk/2013/11/16/farewell-to-the-library-chairs/, and is reposted here with the author’s kind permission. 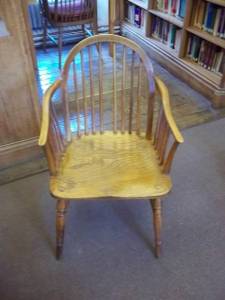 An Oxford college library is a wonderful place to work in but has lots of potential for distracting staff away from library housekeeping. Not only are the books an ever present source of temptation but the buildings and fittings themselves constantly vie to catch your attention – from the acanthus leaves carved into the top of oak bookcases (James Wyatt 1791-4), the ceiling bosses (also late C18th and including simple circlets of leaves, a green man and an ourobouros – the coiled self-devouring serpent ) to the bits of medieval stained glass which, in Balliol Library, include the earliest representation of the coat of arms now universally recognised as that of the university itself. 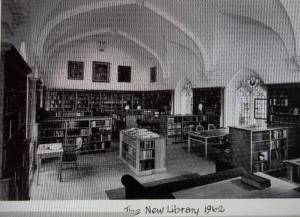 Balliol College Library: Photograph of 1962 of the New Library (now known as the Reading Room)

The Arts and Crafts style oak chairs, a variant on the Windsor chair, were also a striking presence.  Over the years broken spindles and legs have been repaired by the college workshop and until recently there always seemed to be enough spare parts. Over the last year, however, it had become increasingly apparent that new chairs were needed … and imminently. 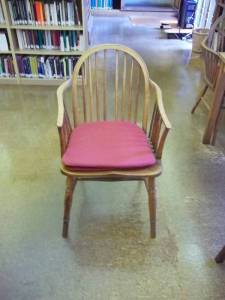 A supplier and style of chairs were chosen – an arcane process done behind closed doors and probably involving smoke, mirrors, hot towels, and baton changes as the Librarian, rather like Dr Who, went through several manifestations (Librarian/Acting Librarian/Librarian/Acting Librarian covering for the Librarian on maternity leave – all within 6 months). Surprisingly quickly a prototype appeared and took its place in the library accompanied by a box for comments. 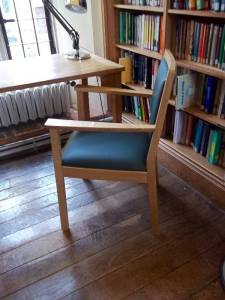 Balliol College Library: The Old Library with the new chair (2013)

At first, armed with my dislike of the idea of change, I  thought there was too much of the G-Plan domestic dining room chair of the 60s about them but closer inspection revealed they were sturdy with well-made joints, very generously sized, had comfortable seats and back rests in well padded leather. They were quite – but not too – heavy, so no rocking  back on the 2 back legs with these chairs. 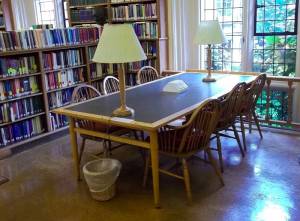 Balliol College Library: the Reading Room with the old chairs

Balliol College Library: the Reading Room with the new chairs

I dreaded the changeover. I had loved the old style chairs which brought with them a whiff of the country house style of the early 1930s. On the day of the swop over, those of us not involved in the logistics of chair moving kept to our lower library lair and out of the way as an enfilade of the old chairs were marched through the middle of our office on their way to temporary storage in the annexe.

Balliol College Library: the Old Library with the old chair 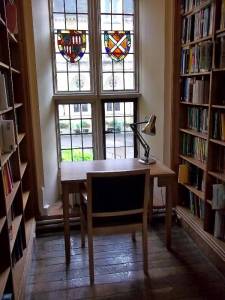 Balliol College Library: the Old Library with the new chair

The new chairs came in 3 lots and after the first batch were in place in the Old Library (1791 but in part going back to early C15) I emerged with some trepidation and a slightly heavy heart to survey the new character of the library. But the funny thing was, although my critical faculties were poised for attack and my aesthetic sensibilities were ready to take a bruising, the library looked little different from before. Excellent. 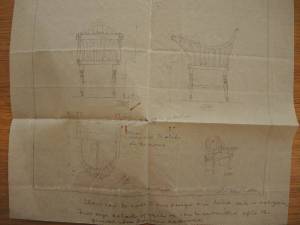 The practical advantages also became apparent very quickly.  While the old chairs were mainly loved for their looks, the increased comfort of the new chairs wheedled its way into the students’ hearts. Indeed,  suddenly people remembered how the the spindles on the back of the old chairs were a torment and how the oak seat, though hollowed out in an attempt at bottom friendliness, needed more than one of the custom-made cushions which albeit in plentiful supply had got thinner and thinner with age. Now, girls (usually) could be seen working with their legs tucked up into the chair and one or two people even fell asleep with head lolling on the back rest (as opposed to slumped on the table in front).  (Were they too comfortable?) Bags could be hooked more easily over the back of the chair which should help keep the floor free of at least some personal belongings. From our point of view each chair occupied a smaller floor area and the arms slipped under more of the desks and tables; even shelving books was easier.  People liked them. What a relief.

The old library chairs had been part of the library for about 80 years, which sounds pretty amazing for a set of chairs. All of the ones we replaced must have been more than 50 years old as they appear in a photograph of 1962 when the mezzanine was put in to make the Reading Room (see above) as we know it today. (It was originally the dining hall until a new one was built by Waterhouse in the C19th). The College Archivist did some rootling around in her archives and came up with an original order and drawings for a similar chair dating from 1928. Hand annotation on these papers indicate certain modifications were to be carried out and that further amendments could also be made. In fact there were considerable changes. The carved Catherine Wheel (St.Catherine is the college’s patron saint) disappeared as did the little table top going across the arms at the front. Our chair has slightly more elegant legs and the design origins in the Windsor chair are also more apparent. Indeed, virtually the only design element linking our chairs with the 1928 drawing is the very unusual curve of the arm when viewed from the side, but this feature is so distinctive as to make me feel certain that chair and drawing have a familial relationship. The Archivist suggests that there may be further drawings and letters in amongst college documents which might resolve these issues and give us a firmer date for the chairs’ first appearance. Such research is tempting but at the moment it is not a high priority project.

We were all fascinated that the firm supplying the 1928 chairs and the joinery was based in St Aldates. If there was a workshop, the company must have occupied quite a big footprint and as yet we haven’t worked out quite where. Much land there belongs to Christ Church and buildings may have been converted for different use, knocked down or may even still be there but behind buildings fronting on to the road. This is also another area for further research. If anyone knows anything about it, we would love to hear from you.

Balliol College Library: a corner of the Reading Room with old library chairs