Q: How do you pronounce Dervorguilla?

A: There are several spellings of this unusual Celtic name; the one above is used by the College and pronounced Der-vor-gilla – hard g as in the gills of a fish – with a slight emphasis on the ‘gil’. Here is Henry Savage on the matter – he was Master 165-72, and wrote the first known history of any college, the oddly titled Balliofergus, published in 1668: 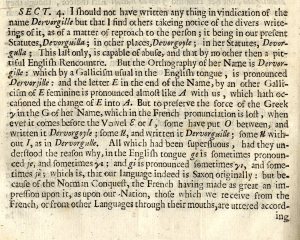 Balliol has several painted representations of its founders, John de Balliol and Dervorguilla his wife; those pictures are shown above and in our online portraits catalogue. The images shown postdate the 13th century Balliols by at least 400 years and are not, strictly speaking, portraits at all. Probably the closest to a contemporary representation we have of Dervorguilla is the image on her seal, and that too is iconic rather than personal in the modern sense; the paintings clearly draw directly on the seal figure.

A: The short answer is that it isn’t ‘a painting of John de Balliol’ at all. It was painted about 400 years after John de Balliol’s death – which occurred well before individual portraiture had become an artistic convention.

The undifferenced family crest on the shield (see http://archives.balliol.ox.ac.uk/History/collegearms.asp) clearly denotes a principal armigerous member of the Balliol family, and the date of death inscribed on the pillar at right of the painting clarifies which one is intended. The portraits of his wife Dervorguilla and translator of the Bible in to English and one-time Master of Balliol John Wyclif, also in Hall, are similarly ‘icons’ of their subjects rather than any attempt at likeness.

update May 2013: Now that the Public Catalogue Foundation’s Your Paintings project is available on the BBC website, it is possible to view an image of the Bodleian’s ‘portrait’ (17th century) of Dervorguilla as well. Unfortunately, they have managed to misspell ‘Dervoguilla’ in Balliol’s two listings, so they won’t appear in searches unless you similarly misspell, but you can see all three together here.

Misapprehensions about the College’s Founders and their families abound, and it may be helpful to refute some which have been so often repeated that it is sometimes difficult to persuade correspondents that there is nothing in them.

The Balliol family had no association with the College after Dervorguilla’s lifetime, and unlike some other ancient foundations, the College was never burdened with the duty of giving privileges to its Founders’ kin. The College’s historic collections contain no primary sources about the Balliol family, and therefore we cannot provide genealogical services to those interested in exploring their own possible descent from the founders of the College.

The College was not founded by the John Balliol who was King of Scots 1292-1296, but by his father John Balliol, and was consolidated by the latter’s widow Dervorguilla of Galloway.

John [de] Bal[l]iol, Founder of the College in about 1263, was the head of a family which had been prominent land-owners in England and France for several generations. Its principal base in England was Barnard Castle, named after an earlier head of the family in England called Bernard . In France the family’s main home was at Bailleul-en-Vimeu in Picardy, whence the name Bal[l]iol derives. There are several places called Bailleul in France and Belgium; some of them are much more substantial than Bailleul-en-Vimeu: they have nothing to do with the family of the Founder or with John Balliol King of Scots, despite occasional assertions to the contrary. In particular, the family of the Founder was not from Normandy. Some of these other Bailleuls have also given rise to eponymous families. (1)

The imposing ruins of Barnard Castle survive at the Teesdale town near Durham which is also called Barnard Castle: they have been the subject of detailed study and excavation. (2)

The main Balliol castle in Picardy was on the high ground to the south of Bailleul-en-Vimeu. No superstructure survives, but the massive earthworks on which it stood can still be found in the dense Bois de Bailleul (part of the Château Coquerel estate). An expedition partly under the auspices of the College surveyed and studied the site 1923-5. (3)

John Balliol Founder of the College died in 1268. The place of his death is not known. His heart was removed, embalmed, and kept by his widow Dervorguilla; it was buried with her at Sweetheart Abbey (which she founded) near Dumfries, in 1290. The burial place of the rest of the Founder’s body is not known.

The Balliol family name was extinct in England and Scotland by 1400. John Balliol and Dervorguilla had four sons. Hugh, Alexander, and Alan all predeceased the youngest (John, who became King of Scots) and left no surviving issue. John Balliol King of Scots had two sons (one of them Edward, crowned King of Scots 1332, but soon deposed) and a daughter, none of whom left surviving issue. Any descendants of the Founders of the College now living would thus be descended from one of their daughters, who were probably: Cecily (m.John de Burgh); Ada (m.William de Lindsay); possibly Margaret (possibly m.Thomas of Moulton); and Eleanor or Mary (m. John Comyn). Descendants of Cecily, Ada and Mary were traced in the nineteenth century. (11)  Descent from the Founders is still often claimed but rarely set out in detail plausibly.  Balliol College does not hold any records about any of the Balliol descendants listed, nor is the college able to validate or verify genealogies sent to us.

Claims which are made from time to time (5) that names such as Bailey, Baillie, Bayley etc derive from Balliol are probably fanciful, but the College itself occasionally appears in informal sources 1500-1700 as “Bayley Colledge”.

The claim (6) that “William Balliol le Scot”, supposed progenitor of the family Scott of Scot’s Hall, was a brother of John Balliol King of Scots (and therefore a son of the College’s Founder) is quite untenable, (7)  as this William was brother to Alexander Balliol of Cavers, Chamberlain of Scotland, who was a distant cousin of King John Balliol.

Much has been written (8-11)  about the College’s Founders and their families. Stell’s work (9) is the most recent, critical and convincing. Unfortunately a good deal of the earlier work dilutes historical fact with romantic twaddle and error. (10)

For an account of the College’s foundation by John Balliol and Dervorguilla, and its subsequent history, see J. Jones, Balliol College. A History. 2nd ed. rev. 2005. You can view digital facsimiles of the college’s medieval foundation documents here.

John de Balliol (b. before 1208, d. 1268), Dervorguilla of Galloway (d.1290) and John de Balliol King of Scots (c.1248×50–1314) all have individual entries in the Oxford Dictionary of National Biography, available in hard copy at reference libraries and online by subscription at http://www.oxforddnb.com.

A useful recent addition to scholarship is Marjorie Drexler’s article ‘Dervorguilla of Galloway’ in Vol.LXXIX (3rd series) 2005 of the Transactions of the Dumfriesshire and Galloway Natural History and Antiquarian Society, pp.101-146.

Q: When was Balliol founded?

A: Although we do not possess the original foundation charter, tradition says that the college was founded in 1263, by John Balliol, father of King John Balliol of Scotland. He didn’t do a particularly thoroughgoing job of his foundation though, and the college was put on a more satisfactory financial footing and given its first formal statutes by his widow Dervorguilla, Lady of Galloway, in 1282.

A full transcription and translation of Dervorguilla’s statutes of 1282 is given on pp.60 ff. of Frances de Paravicini’s Early History of Balliol College, online here. Read more on these pages about the College’s early history and its founders.

Q: Dear Sir/Madam, I am doing some family history research and have encountered a problem that I am hoping you can help to unravel. I have Devorgilla de Galloway married to William de Ros Baron Kendal but I also have Devorgilla married to John Balliol and also to John Vaux whom she married after the death of John Balliol. Is there anything in your records that can help?

A: First of all, my email address hardly ever appears without my name, and in any case it is very easy to find out. Please use it. I always use yours, and your title, as long as you provide them. Occasionally I do have to reply to ‘Dear Enquirer.’ Providing your name is a basic courtesy, as is making the approximately one click it will take to discover mine. There really is no need to address me as ‘Dear Sir,’ or indeed Madam.

Now for your question. The College’s historic collections contain no primary sources about Dervorguilla, Lady of Galloway, or the Balliol family; please see our Founders page at http://archives.balliol.ox.ac.uk/History/founders.asp. Preferably, please have a good look at our website and hopefully find said page before getting in touch. It is there for your convenience and information.

Here is Dervorguilla’s entry in the ODNB [available by subscription, including via many public libraries], which mentions no other marriages. Her documented activities in widowhood make a post-Balliol marriage highly unlikely. Please take anything from genealogical websites which cites 19th century printed sources (if any) with several kilograms of salt.