It’s that time of year – here’s one for the series ‘What can college librarians possibly find to do all summer while the students are away?’ Well, the Library staff are currently carrying out a Grand Shelf Check of all the early printed books – it’s especially important that we know, and record, where everything is because some of the EPBS were moved to St Cross in 2011-13 and some are still in Broad Street. And as always happens with thorough checks like this, all sorts of interesting things are turning up! Some of them include significant proportions of manuscript material – more about this as they emerge. From yesterday: 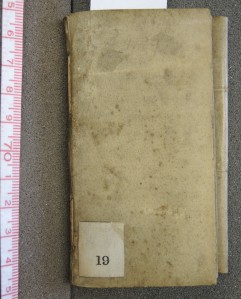 and it’s stitched through the cover on the spine to form a simple cover without boards.

There is a faint reference number of some kind on the front – it may pertain to an old library shelfmark (Balliol or a previous owner) or it may even be an archival reference, because… 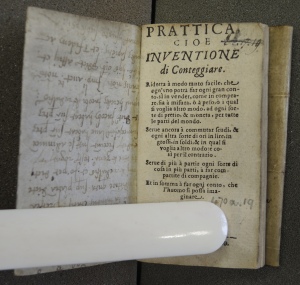 the cover is in fact a cut-down and reused administrative document. This is not unusual – palimpsests (erased texts that have been written over) get the press these days, but old parchments were often reused in humbler ways, as pastedowns, fly/guard/endleaves, linings, fastenings, page markers and indeed as in this case, covers. Here we can see the title page and the inside of the front cover – the document is upside down.

Now we know we’re in Italy, back to the cover! 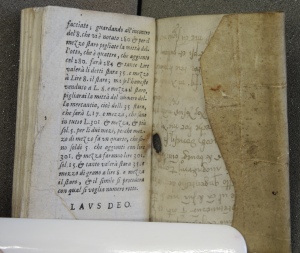 Part of the document is conveniently shaped to form a fore-edge flap for the book. It’s now very stiff, and has been folded inside the back cover for so long it doesn’t function as a flap anymore.

Here is what we can see of the document – upper left of what remains of the text, now the upside down lower part of the inside back cover of the book.

and the lower right.

I don’t have time to familiarise myself with Italian legal documentary formulae, and I don’t know what kind of transaction this document records, or quite how much of it is missing (clearly we have the bottom but not quite the beginning), but I hope somebody who’s practising Italian palaeography and diplomatic may find it interesting! Do drop us a line if so…

a question of apples – the answer

spoiler alert – for the question, see yesterday’s post before reading on!

The answer is 382.
I just cannot transcribe Mr Hill’s diagram in a shape that reflects the MS, but it says:

February 1, 2013 | Categories: manuscripts | Tags: 354, manuscripts, maths, mystery | Comments Off on a question of apples – the answer

a question of apples

From Balliol’s MS 354, the commonplace book of Richard Hill, a London Grocer in the first half of the 16th century, a medieval riddle, or rather an arithmetic word-problem of the kind we used to get a lot of in school. Plus ça change… 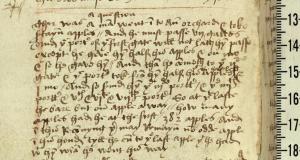 transcript:
a question
Ther was a man went in to an orchard & toke
sertayn apples //and he must pass vij gattes
and ye porter of ye first gate will not latt hym passe
except he geve hym half his aples & on mo
& so he gave hym / and than he commeth to ye ijde
gate & ye porter toke from hym half his apples yat he hade left &
i mo / and so seruid hym ye iijde portter / & ye iiijth
portter & vth & vjth & vijth porter / So at ye laste
he bare but on apple a way // how many
apples had he at the first /

modern English:
There was a man who went into an orchard and took a certain number of apples. On his way out he had to pass through seven gates: the porter at the first gate would not let him pass unless he give him half his apples plus one more, and he did so. And then he came to the second gate, and that porter took from him half the apples that he had left, plus one more, and the third, fourth, fifth, sixth and seventh porters did the same. So in the end he carried only one apple away. How many apples did he start with?

Answer (from the manuscript) tomorrow!

Though November be the month to ‘remember, remember’, though we say ‘lest we forget’ around this time of year, sometimes we do forget. Corporate as well as individual memory can fail, and in this case it seems to have done – temporarily, I hope.  The casts above have come adrift from their identities. The first head and hand are said to be those of Arthur Hugh Clough. I have no idea who the second is supposed to be; it’s not listed in any of the collection catalogues I’ve come across – yet. None of the three items has any identification written on or stored with it. There is a story that Benjamin Jowett was once given the skull of Oliver Cromwell, and bequeathed it to the Ashmolean. This is highly unlikely, but the supposed death mask of Clough (the bearded full head) does look remarkably like several examples of what are said to be death masks of Cromwell – though not at all like others. So who are they really, and how can we tell?

I am currently sorting out a lot of old correspondence and deposit documentation about the collections, and it may be that some clues turn up there. But the mystery will continue for a while…