display from the college archives

A small display in Balliol’s Historic Collections Centre at St Cross Church, Holywell, for the Friends of Reading Abbey, 8 July 2015 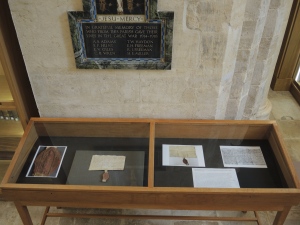 display case with original deed and supporting facsimiles and transcript

original deed was flattened long ago – conservators probably wouldn’t do this now, but it does make it easier to display 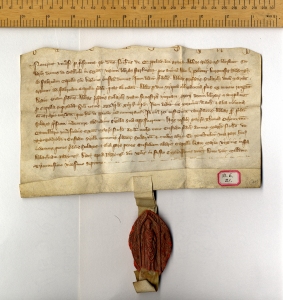 recto of document, face of seal 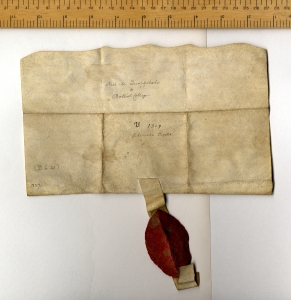 verso of document, with endorsements, and seal

Oxford, Balliol College Archives D6.21 Gifts by the abbot of Reading towards the building of the chapel of St Katherine. 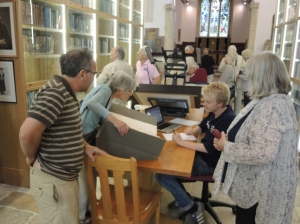 A number of other documents from early in the college’s history were also on display, and visitors were interested in the history of the building and the other print and manuscript special collections kept as St Cross as well as the college’s administrative records. Our student intern explained his summer research project, working on another part of the college archives: the library’s 17th century book borrowing registers. Stay tuned here for some of his findings later in the summer…

Announcing the second talk in our new series about research in Balliol’s special collections:

John Bray, Limner-Binder, and Three Sequences of Manuscripts Made in Oxford (1450-84)

This paper identifies the hand of one Oxford-based illuminator (John Bray, d.1493) in three sequences of manuscripts housed today in Balliol, Merton, and Exeter Colleges. His collaboration with four London illuminators for their production prompts an assessment of the evidence for peripatetic book artisans and for the reliance of the Oxford trade on the supply of London labour.

Holly James-Maddocks is a PhD student at the Centre for Medieval Studies, University of York, completing the thesis ‘Collaborative Book Production: Scribes and Illuminators in Fifteenth-Century London’. She will continue her studies of the London book trade as the Katharine F. Pantzer Jr. Fellow in Descriptive Bibliography at Harvard University’s Houghton Library in 2013-14.

Feel free to bring your lunch. The talk will last no more than half an hour, to allow time for questions and discussion afterwards, and a closer look at some of the Balliol MSS discussed.

Unlocking the Archives is a new series of talks opening up the college’s archives and manuscripts to a wider audience and future researchers, given by scholars from Oxford and around the world about their work on material from Balliol’s special collections.

2 April update: Many thanks to Holly for a fascinating paper! It will be presented to another audience at a later date, and, we hope, the new research (and perhaps photographs) will be published as well, so no summary here. Stay tuned!

Q: regarding an onomastic research project:

– Are all your oldest documents digitized?

– In what archive or department of the archives can I find the names of students from the XIII century?

– Where should I send a request for the names of students and/or teachers during the XX century? Do I understand correctly that the information about students after that date is not presented in the Archives? Until what year does Data Protection apply?

– Most of our documents are not digitised; see post on digitisation. This is true for all colleges; Balliol has more digital images online than most.

I should clarify that the University and Colleges each have their own archives.

– The best single source of information about students from the medieval period is Emden, AB. A Biographical Register of the University of Oxford to AD1500, 1957-9, and A Biographical Register of the University of Oxford AD1501 to 1540, 1974. There were only three colleges in the 13th century, University, Merton and Balliol; a list of colleges with their foundation dates is here. There were also some undergraduate halls, which did not have the same status as college, and other students were not members of any collegiate organisation at all. Surviving records are far from intact; Balliol has no records of its students or Fellows before the 16th century.

– Names of students, lecturers and Fellows in the 20th century will normally be published each year in the college’s alumni publication; for many colleges this is called the Annual Record but some have other titles. As I understand it, anything in such a publication is not considered confidential personal data under the Data Protection Act; however, the way in which such data is used may be affected by the Act. You will need to clarify the ramifications of the Act on your particular project; advice is available from the Information Commissioner’s Office.

Q: When was Balliol founded?

A: Although we do not possess the original foundation charter, tradition says that the college was founded in 1263, by John Balliol, father of King John Balliol of Scotland. He didn’t do a particularly thoroughgoing job of his foundation though, and the college was put on a more satisfactory financial footing and given its first formal statutes by his widow Dervorguilla, Lady of Galloway, in 1282.

A full transcription and translation of Dervorguilla’s statutes of 1282 is given on pp.60 ff. of Frances de Paravicini’s Early History of Balliol College, online here. Read more on these pages about the College’s early history and its founders.

Following on from contact with recent and current projects by Oxford Jewish Heritage, I’ve been scanning a series of title deeds in the college archives relating to Balliol’s acquisition in the 14th century of the site of the former synagogue in Oxford. I hope that making images of the deeds available will help and encourage further study of the history of the Jewish community in medieval Oxford.  In addition to the story their content helps to tell,  many of these documents are beautiful and evocative objects with interesting seals.  Here are a few photos:

seal of Margaret of France, reverse

seal of Margaret of France, obverse

You can see the B.9 series over at our flickr page, and other deeds also relating to the former site of the synagogue as B.11. Full transcripts (Latin only) of most of these deeds are available in HE Salter’s The Oxford Deeds of Balliol College. OHS vol LXIV, 1913.  It hasn’t been digitised – yet – but hard copies are often available on amazon or abebooks.

A useful note about the early development of colleges in Oxford:

‘Before these Colleges were erected, the scholars who were educated in the Halls or Inns subsisted there at their own expence, or that of opulent Prelates or Noblemen ; but many of the youth of the kingdom, and perhaps the greater part, were educated in St. Frideswide’s Priory, Oseney Abbey, and other religious houses in Oxford and its vicinity. As the Colleges, however, increased in the number and value of their endowments, the scholars and dependents on religious houses began to decrease.

‘In Colleges, at first, none were educated but those who were admitted upon the foundation ; but when learning, and the love of learning, began to be more extensively diffused, those establishments were resorted to by independent members, under the names of Commoners, and Gentlemen Commoners.’

– Alexander Chalmers, A history of the colleges, halls, and public buildings attached to the University of Oxford, including the lives of the founders, ill. by a series of engravings (1810)
(2 vols)
available online at http://www.archive.org/details/historyofcollege02chaluoft

Full transcriptions of historic statutes of Oxford Colleges, in 3 volumes. Balliol is first in the first volume. NB these are transcripts, not translations, so early documents are in Latin.
http://www.archive.org/details/statutesofcolleg01univuoft